Do you treat people who are large in size the way Allah wants you to treat them?

Both the Quran and the Holy Prophet have told Muslims that the best among them is that person who shows the best behaviour towards other people.

I hope you’ll Stand up for BEDA’s Weight Stigma Awareness Week, dedicated to eliminating the stigma overweight and obese people face in our society. This week is also an opportunity for all of us to reflect on how we treat people, who are large in size. We often forget how our words can really harm people and cut deep at people’s heart. Ridiculing someone as fat or obese is not funny and is not acceptable in Islam.

Take a moment to think about if you’ve ever called someone ‘fat’ or made fun of someone who is large in size?

If the answer is Yes, then this is an opportunity for you to rectify your thinking and your actions. Calling people Fat, making fun of them is despicable and unacceptable and sadly this seems to be a common practice in our society. A reader from UK shares her experience of living in a family where name calling became so normal that now her nephews and nieces as young as 4-year-old call her ‘fatty Aunty’, ‘Humpty Dumpty Aunty’. To some it may seem like normal thing to hear people in family tease each other about their weight but let me tell you, even if said in jest, these  jokes and teasings aren’t funny. Cutting remarks can wound deeply. If people want to be a part of tolerant society, under no circumstances should they use these words (or any other, or any variation thereof, ) to describe other people. Period.

Islam recognizes the evil of harsh words, words that cause hurt,  and perhaps that’s why there is so much emphasis on guarding one’s tongue and keeping others secured from its invisible harm.

“A true believer is not involved in taunting, or frequently cursing (others) or in indecency or abusing.”‘ (al-Tirmidhi)

“Who is the most excellent among the Muslims?” He said, “One from whose tongue and hands the other Muslims are secure.”

In an enlightening hadith (prophetic narration), the Prophet ﷺ tells us that no one with an ounce of arrogance in his heart will enter Paradise. In seeking to understand what arrogance means, the companions asked “O Prophet of Allah, what if a person likes to dress well?” The Prophet ﷺ responded, “Allah is beautiful and loves beauty. Arrogance is rejecting truth and looking down on people” [Muslim]

The old saying “Sticks and stones may beak my bones, but names will never hurt me” has been long acknowledged as less than accurate. –

Calling some one fat not only causes emotional pain, it can also shape the way we perceive ourselves. We tend to internalize messages we get from others and after a while these messages shape our beliefs about who we are. New research suggests that weight-based criticism in particular can have significant effects on how teens and tweens perceive their own bodies – even if they’re not overweight.

The thing is, all of this negative commentary can impact our health.

Parents and other adults who are “only trying to help” may do harm rather than good, as a recent study from the journal Pediatrics makes clear. More than 350 teens who had attended one of two weight-loss camps filled out detailed questionnaires about their experiences of being victimized because of their weight. It found, not surprisingly, that nearly all heavier teenagers are teased or bullied about their weight by peers. What was surprising was the number of teenagers who said they have experienced what amounts to bullying at the hands of trusted adults, including coaches and gym teachers (42 percent) and, most disturbingly, parents (37 percent).

I am a 27 year old Mother to a beautiful 3-year-old daughter. I suffer from Binge Eating Disorder (BED). Last year before this Disorder was officialy recognised under fifth edition of Diagnostic and Statistical Manual of Mental Disorders (DSM–V), I saw myself as a greedy horse, lazy,ugly and stupid who simply could not stop eating. I’ve always been average/large in size (I really don’t know anymore) but I gained lots of weight after my marriage and the birth of my daughter. This weight simply would not shift. I went on so many fad diets to no avail.  The problem was my inability to stick to these diets and tense relationship with my husband.  Even before my marriage , I was low in self-esteem and lacked confidence, I agreed to marriage, because I believed in Happy Ever After. I always think if I was thin then my family and husband would not have treated me like a worthless person.  If I was thin, then my husband would have respected me, loved me and not call me names that hurt.

When I confided in my husband about my problem with eating (that’s what the help book said, confide in your loved one, get support etc) he turned malice. I gave him a perfect card to use against me. His perfect way of bringing me down is calling me fatty and bringing food home that I consider unsafe and binge food. His other form of teasing is ordering large pizza and leaving it in the fridge. I think everybody in my family knows, I binge. My mother knows for sure. At times when she visits me, she’ll see the evidence of binge in recycling bins and in the form of empty fridge and bare cupboards.

I am at a stage, where even looking at myself in the mirror has become a hard task. Despite walking out with distinction in my Degree, I cannot seem to break out of this loveless and this emotionally abusive marriage and my abusive relationship with food.

It hurts when people call me ‘fat’, I hate when my nephew calls me ‘humpty dumpty aunty’, I hate it when my mother tells me to ‘stop eating like a horse’, I hate it when at family functions, they joke on getting to the buffet table before me. I just want to say, it hurts, it hurts badly. I am a human as well. I have feelings as well. I have a daughter who needs a healthy stable mother, but every time, I try to do something for myself, these remarks come. ‘Your going to gym, what if the treadmill breaks’? I laugh it off, but inside my heart is weeping.

When I tried to end four years of bad marriage, my mother told me that no one in their right mind would marry a girl like me, she said, “be realistic, you have a young daughter, make it work, so what if he verbally abuses you and doesn’t contribute to household bills, marriage is for life-time, make it work, have patience”.  At that time, I was on a trial separation, it cost me so much to lower myself to the ground and ask my arrogant husband to come back and  to stay with me because our daughter needs love of both parents. 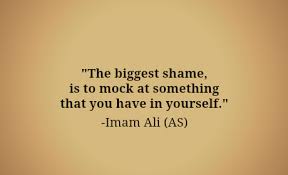 Now with shaky self-esteem, I take a First Step towards Recovery. It will be a journey at a snail pace but I’m going to make the move. The problem now is not just the weight but also my low self esteem and my anxiety. I look at my three-year old daughter, who is so influential and so cute and so adorable. She deserves to go out doors on swings, she deserves to be among children her age, she deserves to be healthy and confidant. So I do it for her. I no longer desire the acceptance of my husband or my family.  What I focus on is my behavior and my deeds. As someone said to me other day. “it doesn’t matter how the other person behaves in a fight; in the long run, it matters how you behave.”